Hidrokon, the world's leading crane brand, was founded on 5 January 1993 under the leadership of Memis Kutukcu. Hidrokon, which has aim of being a pioneer in the sector, proved itself to the sector with its superior engineering from the day one. Starting its production with folded hydraulic Boom crane production, Hidrokon continued to grow steadily for the following years and expanded its product range. Nowadays, it is producing 4 types of products including folding Boom mobile crane, telescopic mobile crane, human lifting platform, and marine crane. Hidrokon, consisting of more than 900 suppliers, 9 resident services and 250 production personnel has a family of 10.000 people and it is growing it’s the family day by day. Having attached importance to personnel training, Hidrokon was also a pioneer in the creation of the Hima Engineering Academy and training of expert engineers. Having set the principle of signing the firsts in the sector, Hidrokon breaks its own record every year with the highest-scaled human lifting platform started with HK 60 TPK. We are proud to be the only company to manufacture AT4100 and Crab Walking Telescopic Mobile Crane in the country sector. 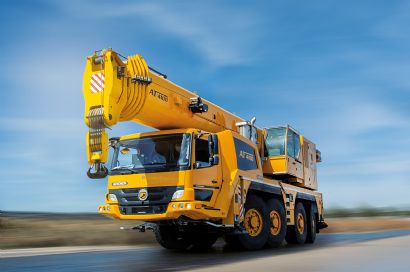